Join our call to stand with Argentinian activists

We need to come together globally to stop corporate power from killing Most Affected People in Most Affected Areas, undermining democracies, selling false solutions for the climate crisis to the public while destroying ecosystems!

While developed countries of the world are championing climate initiatives for reducing global emissions, the world’s largest fossil fuel multinational companies, based in those very countries, continue to go in the exact opposite direction, which is completely incompatible with all their sustainability commitments.

These multinationals are continuing to expand their oil and gas extraction around the world, especially in the Global South, employing highly dangerous and controversial methods such as fracking, seismic surveys and offshore/deepwater drilling.

However, recent victories have been achieved by local resistance campaigns which have succeeded to thwart the plans of some of such corporations, Shell and Equinor, from the coasts off South Africa as well as from the Cambo oilfield off Scotland. Elsewhere, popular resistance is also building momentum: thousands have been mobilizing in Argentina´s coastlines in recent weeks against the arrival of seismic surveys and offshore drilling by multinationals Shell and Equinor, under the call for an “Atlantic Coast Rebellion”.

On December 30, the Argentine government approved resolution number 436, which authorizes seismic studies to be carried out in three offshore exploration areas located in the North Argentina Basin (307 and 443 kilometers from the coast). The project was presented by the Norwegian corporation Equinor in partnership with the Argentinian corporation YPF and the Dutch corporation Shell. If the oil project advances, it would spell disaster for countless species! These blocks are located in breeding and rearing areas for a large number of marine species. The resolution supports the looting, destruction and pollution of the ocean, while consolidating a fossil energy policy, absolutely incompatible with the climate commitments legally in force or ideally to achieve.

While oceans act as geographic barriers between continents, they also connect us. We believe it´s time to come together internationally under a global rebellion of coastlines and affected communities, where we can build a multinational resistance against a multinational threat that continues to colonize the planet and the Global South in search for more oil & gas at any human and environmental cost.

Norway (Equinor) is already extracting oil and gas through fracking in Argentina, by using a method called safe and efficient, while the same method is banned in Norway due to the associated ecological risks such as groundwater contamination and the inducement of earthquakes. In Vaca Muerta, Equinor is operating along with other fossil companies such as Wintershall Dea from Germany, Total from France and BP from UK. In some areas, where the fracking towers are located, children dying of leukemia can reach levels three times higher than national average, the Indigenous Mapuche people are being expelled from their lands, fish are dying in contaminated rivers and fires are rampaging after infrastructural accidents.

This is by no means an individual case – multinational corporations are destroying the homelands of Indigenous peoples globally, committing unforgivable ecocidal crimes, while they are trying to greenwash their business of destruction in the northern hemisphere to perpetuate their profits.

We call on all grassroots movements and organizations fighting corporate power and their environmental crimes to come together in an unprecedented action of international solidarity, where we can bring visibility to these stories and generate enough impact to slow and stop the advance of corporate colonialism all over the world! We will do our part in Norway, home country of Equinor, which is operating in 28 different countries mostly in the Global South, and major gas exporter to Europe.

We are organizing a global action on the 4th of February with many different countries from both Global North and South. Updates will follow soon, so start organizing, stand up in solidarity with the ongoing resistance movements and stay tuned!

The oceans are rising and so are we! 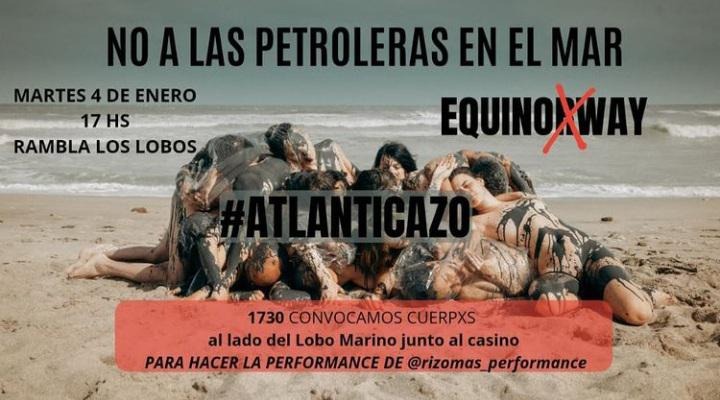